The Star-Spangled Banner - a little piece of Britain

As events across the pond focus on the forthcoming presidential election (and no, I’m not going to get into that, other than to say from a population of over 300 million, surely they could find two better candidates than this…?), I thought I’d digress from matters Anglo-Saxon to something a little more recent; the origin of the Star-Spangled Banner, the song that became the national anthem of the United States of America in 1931.

The anthem traces its origins back to the – somewhat unimaginatively named – War of 1812 which was fought between the USA and the United Kingdom from June 1812 to February 1815. The war itself was a bit of a damp squib as far as the UK was concerned as its major focus at the time was the war to defeat Napoleon in Western Europe. The Americas - and especially the US - however, quite naturally saw the conflict as rather more significant.

It was the United States that declared war; the first time it had done so in its history (all 30-odd years of it at that time). Overall the war achieved little with the British electing, for the most part, to follow a defensive strategy as most of its man-power was tied up with events in Portugal, Spain and France.

The war is, however, notable for at least two events. First the so-called burning of the White House in August 1814. Well, I say the White House, but it was actually known as the Presidential Palace at the time. The Americans were quite rightly aggrieved by this action and it is often remembered today. 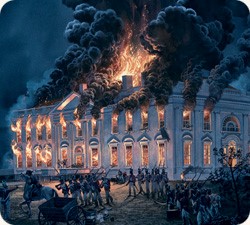 What is less well remembered however is (and note, this falls squarely into the camp of ‘two-wrongs-doth-not-a-right-make’) that this was in itself seen by the British as revenge for the burning of the government buildings in York (the capital of the British province of Upper Canada) by the Americans the previous year. The other notable event was what became the inspiration for the poem which, in time, became the American National Anthem; the bombardment of Fort McHenry in Baltimore.

A few weeks after the burning of Washington, the British army and navy moved 40 miles north west to capture Baltimore, a busy port and a base for American privateers. They launched a combined assault by land and water against well-prepared and heavily fortified American defences. The navy was equipped with the latest technology – called Congreve rockets – which had a longer range than the American shore batteries. This allowed them to stand off, out of range of the American cannon, and bombard the fort with relative impunity. Although there were actually relatively few casualties and little damage down to the fort, the bombardment was nonetheless heavy and spectacular, lasting for the best part of 25 hours.

It was during this time that a lawyer, Francis Scott Key, was inspire to write his, now famous, poem: ‘Defence of Fort M’Henry’. As night fell during the bombardment, the light created by the exploding rockets and bombs served to light up the American flag that was still flying over the fort.  As he and his companions retired for the night, they were left to wonder whether it would still be there in the morning.

When morning came and Key saw that the flag still flew defiantly, he wrote his poem on the back of a letter that he had kept in his pocket. The first stanza eloquently sums up the sense of pride that Key must have felt as he awoke to see that the fort still held against the British onslaught.

O say can you see, by the dawn's early light,
What so proudly we hailed at the twilight's last gleaming,
Whose broad stripes and bright stars through the perilous fight,
O'er the ramparts we watched, were so gallantly streaming?
And the rockets' red glare, the bombs bursting in air,
Gave proof through the night that our flag was still there;
O say does that star-spangled banner yet wave
O'er the land of the free and the home of the brave?

Key gave the poem to his brother-in-law, Judge Joseph H Nicholson, who realised that the words fit rather well with a melody that was popular at the time; ‘The Anacreontic  Song’. In a nice little twist of irony, this song, the basis of the American National Anthem, had been composed by an Englishman – John Stafford Smith – and was the official song of the Anacreontic Society, a gentlemen’s club of amateur musicians which met in London.

The original manuscript can still be seen in Maryland Historical Society on Baltimore. 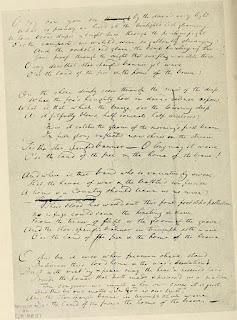 Posted by Paul Bernardi at 03:56 No comments:

Duke William: a Bastard in life and death.

It must have been the event of the year, the one place to be seen in 1087 if you were anyone: the funeral of William, King of England and Duke of Normandy.

William was 59 when he died by when - much like one of his more famous descendants, Henry VIII - he was no longer the fine figure of a man he had been in his youth. Rather, he had become something of a fat bastard, or - as William of Malmesbury (a 12th century English chronicler) rather more eloquently puts it in his Gesta Regum Anglorum - he had become "very corpulent". All that dining on fine French cuisine and good old-fashioned English fare had taken its toll.

Despite this, before his death he was still putting it about quite a bit, as it were. A key aspect of early medieval kingship was the need to see and be seen. A lot of your authority came from showing yourself to your people and leading them in all manner of military exploits. It was during one such exploit that he met his end. Not shot by an arrow, run through by a spear or hacked down by a sword, but rather he hurt himself while riding his horse in the battle of Mantes in July 1087.

Well, to be fair, it seems as though the horse must have bolted or been startled - probably protesting at the immense weight it was having to carry - with the result that William was projected violently forward, rupturing his "internal organs" on the protruding pommel of his saddle. He returned to his capital, Rouen, but failed to recover and passed away five weeks later on 9th September.

Arrangements were made for the funeral to take place at the Abbaye-aux-Hommes (which William himself had founded in Caen) and it was there that William left his final mark on the world, though one which he would probably rather have avoided.

During the service, it was discovered that his vast, bloated body was too big to fit into the stone sarcophagus. You can imagine the panic among the assembled monks. What on earth are we going to do? Everyone's watching! This is so embarrassing!

Then one bright spark no doubt pointed to the most junior novice and ordered him to 'encourage' the body into the sarcophagus. After some pushing and shoving, the inevitable happened; the bloated stomach burst open. There must have been guts and gunk all over the place. I have a horrible feeling, also, that the poor fellow who had picked the short straw must have ended up almost elbow deep in royal, rotting intestines. It can't have been pleasant.

Another chronicler, Orderic Vitalis, tells us that the stench was so great that even the frankincense and various other holy spices in the abbey could not take the edge off it. It was so bad that the officiating monks had to rush through the remainder of the proceedings as quick as they could so they could get the hell out of there. A rumour that the last monk to leave the abbey was heard to remark "I'd leave that for five minutes if I were you" cannot, unfortunately, be verified.