The Battle Of Stamford Bridge - the real reason for defeat at Hastings?


The Battle of Stamford Bridge does not refer back to the dark days of football hooliganism but rather to a military contest in 1066 that established King Harold II as an able and fearless war leader, as competent as any of his predecessors on the throne of England. What was unfortunate for him, however, and at the same time no small irony, was that this great victory was forever overshadowed by his catastrophic defeat and death at the Battle of Hastings fewer than three weeks later.

It is a less than well known fact that England suffered two major invasions in 1066. The invasion of William the Bastard of Normandy had long been expected, as the Norman had made no secret of his intentions since Harold had been elected to the throne of England in early January, following the death of Edward the Confessor. William believed (and whether it is true or not has been debated ad nauseam) that the throne had been promised to him; firstly by Edward in the 1050s and more recently by Harold himself when he had found himself at William's court two years before (whether by accident or design). When the crunch came, however, the English nobles preferred the security and immediacy of a proven, English general rather than the unknown foreign alternative with his fancy diets and weird training regimes. I guess the obvious, albeit unfair, parallel would be the tabloid media demanding the appointment of Big Sam Allardyce over urbane, Arsene Wenger as England Manager... Not that William could be described as urbane, but you take the point!

Anyway, back to matters in hand. Harold had summoned the fyrd (the army) way back in April and had had them mustered in the south, ready for the expected Norman armada. The problem was it was now early September and the men were restless. The fyrd was not a professional army; rather it was made up of ordinary men from the towns and villages, many of whom had farms that needed tending and who were therefore keen to be away as harvest time was fast approaching. Because of its part-time nature, the fyrd was only supposed to provide service for a maximum of two months in any one year, but here they were, still assembled, after five months. They were costing Harold a fortune, eating all the supplies in the neighbourhood and getting grumpier by the minute.

So it was then that Harold took the fateful decision on 8th September to allow the fyrd to go home. He must have hoped that the season was far enough advanced to mean that William would not dare risk the autumnal storms in the channel and that he would be safe until the following year. With even greater irony, at the same moment that the army was disbanding, an invasion fleet was fast approaching our shores, but not in the south as expected, but rather in the kingdom of Northumbria. A fleet of over 300 ships carrying something in excess of 10,000 Norsemen, under the command of King Harald Hardrada (hard ruler) and reinforced by Harold of England's own brother - Tostig - made its way up the River Ouse heading for the ancient city of York. On the 20th September, they proceeded to make short work of the army that was sent out to meet them, was led by Morcar, Earl of Northumbria and his brother, Edwin, Earl of  Mercia. As a result, York surrendered, presumably to avoid it being sacked, and promised hostages to guarantee its good behaviour.

When Harold heard the news of the landing, he must have been incandescent with rage. He quickly assembled his huscarls (elite household troops) and marched north as fast as he could, gathering men along the way. When he arrived near York, he learned that the Norsemen had arranged to receive further hostages and supplies from the city at a place a few miles to the east known as Stamford Bridge; where a narrow, wooden bridge crossed the River Derwent. He also learned that the invader was unaware of his presence, either believing the king would not abandon the south with the threat of the Normans still apparent, or that if he came it would take significantly longer for him to arrive.

So when Harold came upon the Norse, he found to his immense joy and luck that they had left a significant proportion of their army back with their boats at Riccall (several miles further east) and many of those present had even left their armour behind, no doubt  to enjoy the late summer sunshine that bit more. They clearly were not expecting what was about to be unleashed upon them.

Before battle was joined, Harold made an attempt to avoid bloodshed - or perhaps at least to persuade his brother to lay down his arms - by holding a parley with Tostig and Harald. The king offered his brother his old earldom of Northumbria back, but when Tostig asked what he would offer Harald of Norway for his troubles, King Harold looked him up and down (he was rumoured to be almost seven feet tall) and said that he could have "seven foot of good English soil, or as much as he needed as he was taller than other men". Presumably at this point, Harold dropped the mic and walked away, happy with his fighting talk zinger.

In terms of the battle itself, there has been a lot of argument over the positioning of the Norse army, with many historians claiming that they were drawn up on the eastern side of the river. However, I prefer to believe that they were on the west side when the Saxons arrived or, at least, split across both sides. The reason for this is the story - which may be myth, but then so many myths have at least a basis in fact - of the lone Norseman who defended the bridge on his own against the advancing Saxons. This detail was added to the Anglo-Saxon Chronicle some time after the rest of the account, which can't help but cast doubt on its authenticity, but it is a colourful event that has a ring of truth at the very least. 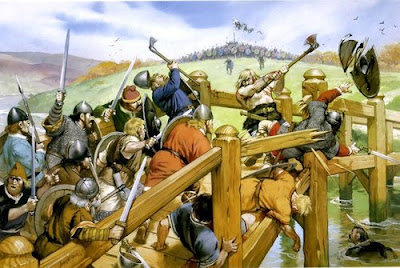 To my mind, the actions of this one man make most sense if the Norse army had been on the west side of the river. Whether they were attacked on the west or began retreating across the bridge before engaging, they would have needed time to reform their shield-wall before the numerically superior Saxons caught up with them. If this one man was able to hold the narrow bridge for even a few minutes then that might have been enough to at least give them a chance to organise a proper defence.

Who knows how long he held out for or how many he killed (the Chronicle claims it was forty), but it was always going to be a suicide mission. So it was that he was slain, not through combat, but instead by a rather cowardly act. A Saxon floated under the bridge in a half barrel and thrust his spear up through a gap in the wooden slats and into the brave warrior's gentlemen's area. 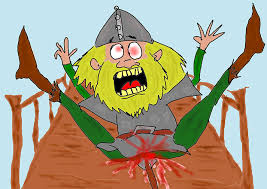 With the bridge clear, battle was joined once more. The time won at the bridge allowed the Norse to put up a stiff resistance, but in the end the advantage of numbers and the lack of armour amongst the Norse warriors paid. In the heat of the fighting, Harald was killed by an arrow to the neck and Tostig was also slain. The inevitable slaughter was briefly delayed by the arrival of the fully-armoured reinforcements from Riccall, but it was too little too late. Eventually the Norse wall broke and the Saxons pursued them back to their boats, inflicting huge casualties in the process. So great was the carnage that the survivors needed only 25 of the original 300 ships to carry them home.


Harold had won a superb victory and proven himself to be a great war-leader, but in the end this battle - rather than cementing his reputation as one of our great, early medieval kings - was to be his undoing. It was while he was still celebrating in York that he heard of the Norman landing in Pevensey, which took place just three days after the battle. Perhaps hoping to repeat his feat at Stamford Bridge, Harold rushed south, leaving much of the army behind (either too tired or too slow to follow Harold and his huscarls who were on horseback).

Rather than wait in London for his numbers to grow, Harold was determined to bring William to battle as quickly as possible; perhaps goaded by the Norman's ravaging of the king's ancestral lands in Sussex. As it was, his army, though probably a similar size to William's, was defeated, leading to wholesale change for the country. If he had waited two more weeks in London, time for the northern army to reach him, the outcome could have been so very different.