Edmund Ironside: the best king we nearly had?

To many, Edmund Ironside is but a footnote in the history of England prior to the Norman Conquest. Other than having a pretty cool nickname (awarded for his valour in fighting the Danes, according to the Anglo-Saxon Chronicle), this man who ruled for little more than seven months had the makings of a king who could have rivalled Alfred's achievements and might also have earned the epithet 'the Great' had he survived.

Edmund was born somewhere around 988-990, the third son of Aethelred II, one of the other few well known late Anglo-Saxon kings due to his even cooler nickname, 'the Unready'. Rather than meaning he was forever popping to the shops without his wallet, or was always last to be ready to leave the house on family days out, the name is actually a passable attempt at late Saxon humour. The name Aethelred meant 'Noble Counsel' and so Unraed was a play on words as it suggested he was poorly counselled or unwise. The chronicler who came up with that one must have been extremely pleased with himself and, no doubt, never let anyone forget it.

Poorly advised or not, he was certainly prolific in the bedroom department. Through he first wife, Aelfgifu, he was father to six boys and four girls and then, when she died, he married Emma of Normandy and had two further boys, Alfred and Edward (later to become Edward the Confessor) and a daughter. 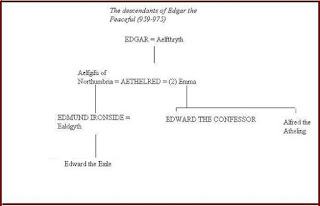 Aethelred's nickname was well earned though. It was during his reign that the Danish incursions began again. The king's response, however, consisted largely of paying huge sums of money, known as the Danegeld, in order to secure peace and freedom from his lands being ravaged. Whilst it may have worked in the short term, it had the effect of encouraging more raids as they came with the expectation of booty with little danger to life or limb. No doubt at the time it was felt to be the best way to spare his people and their lands and - to be fair - it had been a tactic in use for some while; even Alfred the Great had bought off the Danes at times.

Matters came to a head, however, on St Brice's day (13 Nov) 1002 when Aethelred ordered the massacre of all Danes living under English rule. On its own this was inflammatory enough but one of the victims on that day was the sister of Sweyn Forkbeard, king of Denmark and Norway. This led to years of Danish invasions and raids, culminating with the whole country submitting to Sweyn at the end of 1013 and Aethelred forced to flee to Normandy with Emma and their two children, Alfred and Edward. No mention is made of Edmund and it is thought that he stayed in England, presumably somewhere out of the way of Sweyn.

Sweyn was therefore, effectively, king of all England, though his reign lasted no more than a few weeks as he died in February 1014. At this point the Danes declared Sweyn's son, Cnut (yes him that tried to stop the tide) king, whereas the Witan (a kind of precursor of Parliament) declared for Aethelred and beseeched him to return from Normandy.

For once in his life, Aethelred showed decisiveness and energy, so much so that Cnut was forced to return to Denmark. He returned a year later, however, and proceeded to ravage most of England. By this time Aethelred was very sick and was unable to lead the army himself, eventually dying on 23 April 1016 in London. Most of the country was under the control of Cnut by now and the Witan proclaimed him king. London, however, resisted and elected Edmund king. 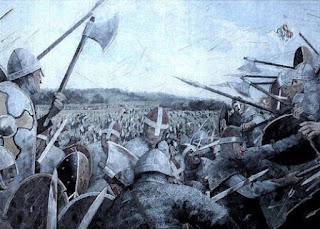 Now began seven months of almost continual struggle, with Edmund time and again raising troops to fight the Danish invader. In total, Edmund fought five battles against Cnut, most of which were inconclusive, until the battle of Assandun in Essex in October. In order to raise enough men to fight the Danes, Edmund had allied with the earl of Mercia; a man called Eadric Streona who had a reputation for changing sides. It proved to be a disastrous move as, at the crucial moment,  Eadric deserted Edmund and turned his men against the king. The outcome was a catastrophic defeat for Edmund in which many of the nobles of the land and their sons were killed.

Even then, Edmund refused to capitulate. As his ancestor, Alfred, had before him, he went west once more into the heartlands of Wessex to raise a new army. Cnut caught up with Edmund in Gloucestershire where, rather than fight another battle, a deal was struck such that the kingdom was split between the two of them, with the agreement that on the death of the first, the survivor would assume the whole kingdom.

It is a matter of conjecture what would have happened next as, before anything could happen, Edmund died - only a month after the treaty had been signed. The cause of death has never been fully established, with many pointing to assassination on Cnut's or Eadric's orders. A couple of chronicles even carry a gruesome tale of an assassin hiding in the khazi and killing the king by stabbing him up through his guts as he went about his business. There can't be many worse ways to go, and it could not have been too pleasant for the assassin either. However, it is just as likely that he died of wounds he received at Assandun.

Edmund's death settled matters as Cnut assumed the kingship of the whole of England, ruling until 1035 when he was succeeded by his son. All was not yet lost for the House of Wessex, however, as Edmund's step brother, Edward (the Confessor), was to return to England to take the throne in 1042.