William the Bastard became King William at the Battle of Hastings, right?

As any school child will tell you (actually - this seems to be no longer the case, judging by a quick survey I conducted with the two apprentices that joined our team this month), the Battle of Hastings occurred on October 14th 1066. Those that were really paying attention might also be able to tell you that William was crowned in Westminster Abbey on Christmas Day, 1066.

Two and a half months may not seem like a huge time to us from this far distant, but I think it fair to say that, whilst likely, it was by no means inevitable that William would make the transition from battle-winner to King of England. Ten weeks is a long time in politics - as true then as it is now.

To understand what happened during those weeks after the battle, we need to cycle back a little, back to the death of King Edward the Confessor at the start of January 1066. At that time, it was no secret that William coveted the English throne. Indeed, he claimed to have had it offered to him by Edward back in the 1050s, when it was clear that Edward would have no son of his own to whom to pass the crown. There was also the much debated and oft-disputed story - seen in the Bayeux Tapestry - of how Harold (then Earl of Wessex) had sworn on holy relics to support William's claim when the time came during a trip to the continent some time around 1064.

At the start of 1066 then, the matter of the succession was by no means clear. At this time, English kingship, while it usually passed from father to son, relied on a principle of acclamation. The matter was put before a council of lords and prelates to decide who was most suited. If there was an eldest son of a suitable age then the decision was usually quite simple. But in January 1066, that luxury did not exist.

Instead, there was, at best, a choice between two candidates; a choice that was to be taken in the knowledge that the storm clouds of war were gathering. Not only was it to be expected that William would want to press his claim to the throne, there was also the small matter of the Norwegian King being rumoured to fancy his chances too. Everyone knew that England was going to be facing a turbulent year and this - plus some fancy footwork on the part of the richest, most powerful family in the land - saw the decision swing in favour of Harold Godwineson; a man who bore no relation to the royal family other than by the fact that his sister, Edith, had married King Edward. That would be like Kate Middleton's brother becoming the next King of England now.

Whilst we can assume that much political chicanery took place to ensure the vote went the right way (something else that seemingly has not changed over the years (oooh controversial view that history teaches us about the present, there!)), Harold may well have won the vote anyway due to the impending military crisis that threatened the nation. Harold was 44 years old and a proven war leader - he was exactly the kind of man you would want to be in charge in such difficult times. The other contender probably never stood a chance, realistically.

But who was he up against? In short, a lad of about 14 years who had not even started to grow a beard yet. A boy who had not even been born in England (he had, rather, been born in exile in Hungary) and who had few friends at court. It was almost inevitable that he would lose the contest to Harold. But the one thing that he did have in his favour was that he was of the royal line. He was the grandson of Edmund Ironside, who had been king for a brief period in 1016 (see another entry in my blog for an article on him) until his death in the midst of the fighting against Cnut's Danish invasion. Ironside's young son, Edward (known as The Exile) had been sent overseas ostensibly to be killed but ultimately being shipped off to deepest, darkest Europe where he had married a noble woman and had a number of children, of which Edgar was the eldest son. 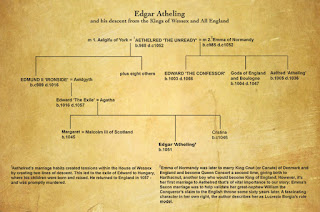 So Edgar was directly related to Edward the Confessor - being his great nephew (Ironside was the Confessor's half brother). In happier times, it might well be assumed that Edgar would have become king. His age was no barrier - there are plenty of cases of predecessors taking the throne at similar or even younger ages. But the mix of political machination and military expediency meant that Harold was always the one who would be acclaimed king of England.


Now this is an important point. In Saxon times, once you were acclaimed that was it - you were King. True there would be a nice coronation and slap up feed to put the icing on the cake at some point later, but the cake was baked on the day you were acclaimed. The Normans did things differently, however. For them it was the act of coronation - the anointing with holy oil by a bishop or three that made you King. And this helps explain what happened after Hastings.

So we fast forward nine months. Harold lies dead on the ridge at Senlac Hill (most probably hacked to pieces by vengeful Norman knights rather than having an arrow stuck in his eyeball - see another blog entry for that particular tale). So what happened next?

From William's perspective, he stayed in the region of the battle for several days, burying his dead and otherwise allowing his exhausted men to recover. But if he had hoped that the country would immediately submit to his authority, he was to be sadly mistaken. Not one notable came to swear fealty. In essence then, all that he had managed to do was to win a battle in the south east corner of the country. Yes, in doing so he had killed the King, two of his brothers and many hundreds, if not thousands of their best warriors, but the country was still resolutely defiant.

London was now the centre of this defiance, for it was here where Edgar was to be found. With Harold and his brothers dead, Edgar was now the most natural candidate for the Saxons to rally behind. And this is what had happened. Edgar was acclaimed king with the support of Archbishop Ealdred of York and the Earls Morcar and Edwin of Northumbria and Mercia respectively (the two most powerful nobles left in England).

By way of temporary segue, it should be noted that this is a great way to start a fight at your local pub quiz should you ever be asked how many kings ruled England in 1066. The traditional answer - according to the history written by the winning Normans - is 3 (Edward, Harold and William) but there is a very fair argument to claim it is 4 by including Edgar. There are charters and documents that show him exercising royal authority e.g. confirming the appointment of an abbot in Peterborough for example. Should you choose to die on this particularly hill, I wish you luck. Don't blame me if you get barred though.

Whilst the Earls had been involved in the two battles against the Viking Harald Hardrada near York back in September, they had not fought at the Battle of Hastings, arriving too late to take part. Much has been made of their personal motivation both before and after the death of Harold, but it is reasonable to suggest that they needed more time to recover from the losses they sustained at Fulford Gate and Stamford Bridge and could not really have been expected to make it down to the south coast in time. Had Harold waited in London for another week - as many had advised him to do - perhaps they might have joined their King and - who knows - their forces might have tipped what was, in the event, a very evenly matched fight in favour of the English.

Now, however, they stood by Edgar in London no doubt planning the defence of the realm. But what, in the meantime, was William up to? Having realised that the crown was not going to come to him, he resolved to go get it himself. Gathering his forces, apparently reinforced with new men from across the channel, he marched to the east where Dover was ransacked, despite having surrendered. Canterbury then followed suit and submitted at the Normans approached.

But not so London. At the time, the city was well defended by walls that had existed since Roman times and which had been repaired and improved by King Alfred almost two hundred years earlier. There was also only a single bridge across the Thames which ran from Southwark to the city walls. And it was here that the Saxons stood their ground. The Normans decided to test the defences by sending a detachment of around 500 or so cavalry to attack the bridge, but they were beaten back and had to settle for burning the settlement instead.

William now had a quandary. He risked significant losses if he tried to fight his way across the bridge and he did not have the boats available to ferry his army across the river. He chose the only option that was really available: he struck west, following the river until he came to Wallingford, the first available crossing that was not defended. In fact he was actually invited to cross freely by the Lord of the town who could, perhaps, see which way the wind was blowing.

All along the route, William unleashed his men to pillage and burn. In doing so, he was sending a clear message to Edgar. Resistance comes at a price. Give up now or face the consequences. It was at Wallingford, also, that Archbishop Stigand of Canterbury came to swear fealty to William, a sure sign that things were beginning to fall apart.

After a few days rest, William began his march on London, possibly along the route of the Icknield way. As he continued, so too did the harrying. It was also around now that the two brother Earls floated away back to their lands in the north. Again, it is not known why they chose that course of action - perhaps they could see the writing on the wall, perhaps they were craven, as was claimed by many observers at the time - but either way, it left Edgar with no effective support. 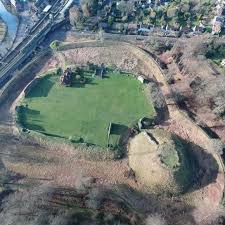 Bowing to the inevitable, Edgar - and those lords and bishops who remained in his camp - then rode the 30 miles north-west from London to Berkhamsted (where William soon built a castle) where he finally bent the knee to the conqueror. Edgar's short reign was over before it had begun. Contrary to what you might think, though, he did not find himself forgotten in some dungeon or put to death to avoid becoming a future focus of rebellion. Rather the young lad was to outlive his nemesis by a good 30-40 years, not dying until the 1120s when he would have been in his 70s.

My Thurkill novels will see the hero's story intertwined with that of Edgar from time to time, including the current work in progress - Thurkill's Rebellion - which is set in the months after the Battle of Hastings.

Posted by Paul Bernardi at 09:18 No comments: