Brunanburh - the earliest Battle of Britain?

Brunanburh: it's one of the most important battles to take place in this little island and yet few may have heard of it. It has also been the subject of much debate over the last couple of hundred years as to where it took place, with most scholars plumping for a site on the Wirral in Cheshire due, mainly, to a place name that is quite similar. However, a theory put forward by Michael Wood has opened up the possibility of a new location that - to my mind - is very persuasive.

So, what do we know about the battle and it's historical context? It took place in 937 AD between the forces of King Aethelstan, grandson of Alfred the Great, and those of an alliance of Britons and Vikings from various areas across the North, Ireland and Scotland. It is interesting that Alfred is the only king to be named "Great" in the whole of English history and yet there is a strong case to be made to say the achievements of his grandson were at least as impressive, if not more so.

True, Alfred had held back the Great Heathen Army, preventing it from conquering his kingdom of Wessex and - in so doing - fighting back from a low point in 878 when all appeared lost (you know - the story of him burning the cakes when he was supposedly hiding an a farmer's house in the marshlands around Athelney while the Vikings ran riot across his kingdom?). But the fact remains, by the time of his death, he was really only the ruler of Wessex. 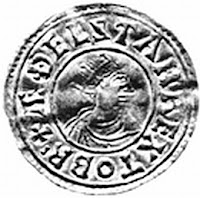 His grandson, however, came to the throne in 924 and managed to consolidate the gains made by Alfred and also those of his father, Edward the Elder and then build on them still further such that by 927 he was king of all of what can be called England following his invasion of Northumbria and the capture of the the Danish capital at York. From this point he began styling himself (as seen from his coinage) 'Rex Totius Britanniae' (King of all Britain) and he also forced the various other Kings of Britons to submit to him in grand ceremonies.

Following a further invasion into Scotland in 934 - in which he forayed as far north as Caithness - he was effectively the most powerful ruler Britain had seen since the Roman Empire. Understandably, it was all too much for his enemies to bear and so, in the summer of 937, a great alliance under Constantine, King of Alba, and Anlaf Guthfirthson, King of Ireland and erstwhile ruler of the northern kingdom of York invaded, bent on bringing the upstart West Saxon down a peg or too.

But Aethelstan was not simply all mouth and no trousers. Whilst there was great slaughter on both sides, his forces were victorious, killing hundreds of men including five kings, seven Viking earls and the son of King Constantine. So where did such a momentous and crucial event in the history of Britain, take place? 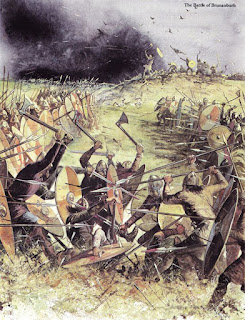 Over the years, more than thirty sites have been suggested but most recently, consensus has generally formed around the Wirral and, specifically, a place called Bromborough - on the basis that its name can be traced back to Bruna's fort (i.e. burh). But, beyond the name itself, there is little or no evidence to back it up. Indeed there is quite a bit of evidence that actively casts doubt on it. For example, in the early 1100s, the chronicler, John of Worcester, stated that Anlaf's fleet landed in the Humber. Given that his family used to rule the kingdom of York, it is not a huge leap of faith to accept that Anlaf may have sailed around Scotland to pitch up on the east coast of England given that it is possible to sail up the Humber to within a few miles of York (much as Harald Hardrada did in 1066 (see other blog on this)).

If Anlaf's main objective was to restore his Kingdom of York, what was he doing in the Wirral? And why would a Scottish invading army end up there as well? As Michael Wood puts it, we should really focus on looking for the battle site somewhere to the east, on the route from York down through the Danelaw (where the Danes had held sway for some decades).

In the search for that alternative location, Michael points out that another name - Wendun - exists for the battle, one that was captured in the  Historia Regum, a set of short annals written at Chester-le-Street at around the time of the battle. Whilst Wendun has also never been identified, Michael makes a plausible case for it being rendered as Went Hill (dun meaning hill), a striking landmark that rises 150 feet above the valley of the river Went, one of the tributaries of the Humber. Positioned as it is on the traditional border between Northumbria and Mercia (a place often used to muster the armies of the northern kingdom in Anglo-Saxon times) it makes an ideal candidate for the battle-site.

Added to this is the spelling of Brunanburh itself. Different spellings occur in the various editions of the Anglo-Saxon Chronicle. The 'A' edition spells it Brunanburh (which has been the traditionally accepted version - giving rise to Bruna's Burh), but the 'B' and 'C' versions spell it with two 'n's : Brunnanburh. Even the original copy of the A version has a second 'n' hand-written above the word as if correcting a typo.

So what does another 'n' matter? Someone just spelled the poor guy's name wrong, right?  Maybe, but Brunnanburh also carries the meaning of Fort of the Spring. Just south of the river Went is an old Roman Fort inside which is a famous spring that today goes by the name, Robin Hood's well. It remains circumstantial, of course, but Wendun and Brunnan Burh both fit well into the context of this fort on the southern border of Northumbria. It also makes sense in an historical context in terms of the struggle for power in the North of Britain. The southern border of Northumbria makes for a far more logical location to stand and fight the all-powerful Aethelstan for control of the kingdom of York than a remote site stuck out on the Wirral.

It may yet never be proven beyond doubt, but I would place a sizeable wager on Michael Wood being right.