Did Harold really take one in the eye?

It is the story that every schoolchild is brought up on (or at least was when I was at school in the distant past); that brave King Harold was killed at the Battle of Hastings by being shot in the eye with an arrow. But did it really happen? Have millions of children been lied to over countless generations in what can only be described as a shocking, shameful conspiracy to cover up the truth? (OK - i may be over-egging the pudding a bit there but the arrow in the eye story could perhaps help to mask events that were altogether less palatable to the reputation of the new king, William I. 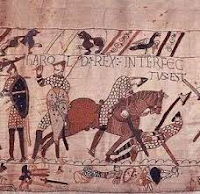 But look at the evidence, I hear you say. The Bayeux Tapestry clearly shows him standing there, clutching an arrow that is protruding from his skull under the very words "Harold rex interfectus est" (which as every school child also knows from their Latin lessons  means "King Harold was killed"). The head of the figure with the arrow in his eye even bisects the word, 'Harold', surely leaving no doubt as to this being supposed to represent the king. What could be clearer? On top of this there are a number of chroniclers who also make reference to the arrow in the eye story. William of Malmesbury, writing in the 12th century, states "his brain was pierced by an arrow", and Henry of Huntingdon (in the same era) backs this up by saying: "The whole shower sent by the archers fell around King Harold and he himself sank to the ground, struck in the eye." With such evidence in front of us, why then do some suggest this is not how things played out in truth?

Well, let's look first at the Tapestry. Just which figure is supposed to be Harold? Looking at the picture above, there are really three options: the man to the left, clutching the arrow; the man to the right who has just been cut down by the mounted soldier; or they are both meant to be the same person (such a construct - showing the same person within consecutive 'frames' of the storyboard is used elsewhere, but it is perhaps doubtful here as - in the space of a couple of inches he has lost his shield and gained a battle-axe).

There is also doubt over whether the first figure is even clutching an arrow! There are some who contend that the significant restorations undertaken in the 19th century may even have altered the whole sense of the Tapestry. It is suggested that the figure was - in the original - in fact holding a spear ready to launch at the enemy. And then, finally, even if we accept that it was an arrow that was depicted, how do we know that this represents what actually happened on the day? There are other fabrications (ooh - do you see what i did there?) contained in what is essentially a piece of propaganda rather than a journalistic account of the battle.

The fact is that the Tapestry is the only (near) contemporary source to refer to the arrow in the eye story. The Chroniclers referred to above were writing well into the next century and are not, therefore, first-hand accounts. There are four other contemporary accounts that make no mention of it at all. Two (the Anglo-Saxon Chronicle and William of Jumieges) can be discounted because their accounts are brief and thus that level of detail would not be expected. The accounts held in the other two (the Carmen de Hastingae [song of Hastings] and William of Poitiers) are all the more remarkable.

William offers a long and detailed account of the battle and yet omits to mention how Harold met his end at all. Is it possible that he did not know? Or is it more likely that he had read the account in the Carmen and thought it best not to mention it - him being William the Conqueror's man, it would not do to cast a poor light over his master.

So what does the Carmen say? It states that, late on in the day, William spotted Harold, laying about with his sword, casting down all and sundry. The Duke gathered a small group of knights and charged. They succeeded in killing the king and then the manuscript goes on to give the gory details of the injuries inflicted: pierced with a lance, beheaded with a sword and disembowelled with a spear. It goes on to say that his 'thigh' was hacked off and carried away some distance (Note - for thigh, read manhood, dick etc.).

So why is this account not more famous than, or at least as famous as the old arrow in the eye shtick? Some have suggested that it can't be true because if William had been directly involved in the death of Harold it would have been shouted from the rooftops as a great feat of arms and, thus, the fact that this is not the case is proof that it didn't happen. Fake news was a thing even then, it seems.

Perhaps more telling is the fact that William of Poitiers, the king's own biographer, is silent. He neither confirms or denies the Carmen's account and that silence is deafening. His aim was to present William as a righteous and merciful king and having him involved in the hacking to death and subsequent mutilation of an annointed king (usurper or otherwise) would not help the cause in any way. His failure to deal with the subject could therefore be held to actually strengthen the Carmen's claim to be the one true account. It should also be remembered that the author of the Carmen (one Guy d'Amiens) was supposedly a close associate of the knights who were named as Harold's killers.

In summary, I guess - as with most things from this time - we may never know for certain exactly what happened. For me, however, we know that the Normans did loose a prodigious number of arrows during the battle, so there is a fair chance that one or more struck the king. We also know that William was in a very tense situation; he had this one chance to seize the throne and so the opportunity to kill Harold outright rather than risk him slip away into the gathering gloom was, perhaps, too good to miss. Finally, history - as ever - is often written by the victors, and I am sure they would not be above a little bit of airbrushing to protect their man's reputation.
Posted by Paul Bernardi at 02:26 No comments: