The term Huscarl (or Housecarl) derives from two old Norse words meaning house (unsurprisingly) and man or servant. The term could therefore literally be taken to mean household man – i.e. one who was in the service of a King, Earl or other great Lord but, beyond that, how much is really known about what that title entailed?

I think it is true to say that – and my own novel ‘Thurkill’s Revenge: Part 1 of the Huscarl Chronicles’ is very much guilty of this – there is a tendency, if not a desire, to romanticise the term to imply that they be some kind of elite warriors dedicated to the service of the King or other great nobles of the land; almost a professional standing army of sorts. Whether it be the SAS, the Marines, the German storm troopers of World War One or right back to the Immortals of the Persian Army at the battle of Thermopylae, I think there has always been a desire to see certain troops as special, capable of extraordinary feats of courage or skill. But – in the case of the huscarls – what evidence do we have of their right to be included in this exalted group?

The term only really starts to appear after 1016, following the first (and less well known) successful invasion of England that took during the eleventh century: that of King Cnut the Great of Denmark. And even then, there is little in any primary English sources to help us understand the significance (or otherwise) of the term.

Previous historians have therefore, understandably, turned to Scandinavian sources for answers. And there they have found accounts written perhaps over 200 years later which describe the huscarls as some kind of professional, military guild with all sorts of rules governing expected behaviour which make them sound like some kind of touring rugby club. By way of example, the Lex Castrensis Sive Curie speaks of the fact that when the huscarls sat down to dine in the King’s hall, their position at the table was determined by their respective rank and status. Furthermore, minor misdemeanours would be punished by demotion down the pecking order, much like drinking out of turn on tour or having a half instead of a pint. Commit three petty crimes in a row and you would be demoted to the foot of the table and none would be allowed to communicate with you. To add insult to injury, the other huscarls would be encouraged to pelt you with gnawed bones. All of which you could imagine going on at the annual gathering of the Old Gitonians Rugby Club.

This, along with other related evidence, led to the belief that the pre-conquest English Kings had at their disposal a sizeable force of paid, professional warriors, almost mercenaries in fact, who had little role other than to be ready to fight for the King whenever called upon to do so. They were supposedly part of a well-ordered guild-type structure with a defined set of rules to maintain rigid discipline.

But when you start to look at the evidence more closely, questions can start to be raised. And here I should point out I am indebted to Nicholas Hooper who has done just that in his essay: ‘The Housecarls in England in the Eleventh Century’ (produced in the book: Anglo-Norman Warfare, published by Boydell and Brewer).

Hooper argues very robustly and eloquently that when you look at the contemporary written sources (especially the Anglo-Saxon Chronicle and the Domesday Book) you can see that there is little in the way of consistency in the usage of the term, huscarl, giving rise to an alternative theory that there was no such professional warriors’ guild bound by this complex set of rules of conduct (however attractive a thought that may be). Rather, what we seem to have is a continuation of what went before. The King had a number thegns in his service whom he could call upon to fight along with any number of other services that he might need of them, like tax collection, messenger, steward of royal estates etc. This had long been the case and the nothing had changed other than the name. 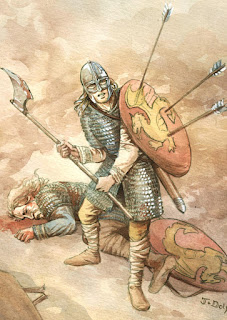 For me, therefore, the argument that is most striking is to say that these huscarls were simply the household men of the Danish King Cnut, no different to the household men that earlier English Kings had to call upon, of which an example can be seen as far back as King Edwin of Northumbria when – in 627, as Bede tells us – two of “the king’s men” (Lilla and Fordhere) gave their lives in defence of the King when he was attacked by the West Saxon assassin, Eumer.

The fact that these men were given a Danish title perhaps simply reflects the fact that so many of these men were now of Danish origin, being in the service of Cnut and his sons. They might just as easily have been called by the existing Saxon term, thegn, just as their behaviour would have been governed by existing Saxon laws that are in evidence back to the time of King Alfred and probably earlier. (King Alfred had laws that forbade fighting in the King’s Hall – and we can imagine that such laws came about in response to the very thing they sought to outlaw).

As retainers of a Lord or King they were certainly distinct from the fyrd (the levy of men which the King summoned in times of war from the towns and villages of his kingdom to form the massed ranks of his army) and it is most likely that they had access to superior armour, weaponry and training but this does not, of itself, equate to a standing army of paid professional elite warriors. Yes, they formed the core of King Harold’s army at Hastings, having endured a long round-trip march to Yorkshire to fight the Vikings at Stamford Bridge only a couple of weeks before. But their presence alone was not going to be enough to turn the battle in Harold’s favour. Indeed, the realisation that they were not ‘special forces’ perhaps goes some way to contextualising the defeat. We have no right to expect more from them than from any other paid retainer in any battle of the era.

All that being said, none of it will, of course, stop me from bigging up my hero, Thurkill, giving him a level of martial skill that exceeds all those against whom he finds himself pitted in the name of honour and glory. What's more, he has a massive two-handed axe and he's not afraid to use it.

Posted by Paul Bernardi at 09:33 No comments: