Following on from part one in which I discussed the role of an early 7th century, unnamed Queen of East Anglia, here's a look at another royal woman from the same era, but this time from further north in the kingdom of Northumbria. At least, on this occasion, we know her name: Hild.

Hild was born around the year 614 into the Deiran royal family (Northumbria, at that time, was made up 2 provinces, Bernicia and Deira with the latter being the southern half centred on the old Roman city of York). She was the second daughter of Hereric who was the nephew of Edwin and the grandson of King Aelle who had ruled Deira in the late 6th century. 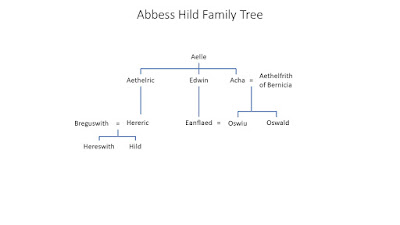 Little is known of her immediate childhood, but at the time of her birth, much of the royal family was in exile as a result of incursions and eventual take over by the northern neighbours from Bernicia. Edwin, who would eventually become the king who would unify the two parts in 616 was in exile at this point in either Mercia or East Anglia (the latter being where he came into contact with the aforementioned unnamed queen who effectively saved his life, convincing her husband, Raedwald, not to turn Edwin over to his Bernician enemies).

Hild's father - Hereric - meanwhile, was in exile in the British kingdom of Elmet (based around the Leeds area) and it may have been here where she was born and spent her early years. While she was still a toddler, and before Edwin became king in 616, Hereric was poisoned at the royal court, probably at the behest of King Aethelfrith of Bernicia who - as well as pursuing Edwin - was apparently on a mission to wipe out the entire Deiran royal family to prevent any future threat to his rule.

With Aethelfrith's death at the battle of the River Idle in 616, however, Edwin was able to become king of Northumbria. Though it's not mentioned explicitly, he must have called for the return of Hereric's family from exile in Elmet. We are told that one of Edwin's first actions as king was to annex Elmet and banish its king in recompense for the murder of his nephew. It is most likely as a result of this event that Hild and her mother (Breguswith) and sister (Hereswith) returned to Edwin's court.

The only other event we know from Hild's childhood came in c.627 when her great uncle, Edwin, converted to Christianity. We are told in Bede's Ecclesiastical History that Edwin was baptised in York on Easter Day along with his whole court in a small wooden church which had been hastily built for the occasion. Included amongst those baptised on the day were Breguswith and her two daughters; Hild would have been around 13 or 14 at the time.

Sometime soon after this, Hild's sister, Hereswith, was sent to East Anglia to marry Aethelric, brother of King Anna. During this period the common fate of the sisters, daughters, nieces, etc. of kings was to be used as pawns in sealing alliances with other kingdoms and that was very much the case here. How Hild avoided a similar fate is not known, but the next time we meet her is when she also travelled to East Anglia with the intention of joining her sister in becoming a nun (which seems to be the other main pastime for royal womenfolk). The assumption is that Hereswith's husband had died and, rather than be remarried, she had decided to enter a convent. The only problem, however, was that there were no nunneries in East Anglia (being very early in that kingdom's christian development). Hereswith therefore made her way to Chelles Abbey in France, again presumably making use of familial connections (Edwin's wife, Aethelburh, had been a Frankish princess).

Instead of completing the journey to France, however, Hild was called back to Northumbria by Bishop Aidan who gave her a small grant of land on the north bank of the River Wear to 'live as a nun'. She stayed here for a year, learning the ropes of Celtic monasticism, before being appointed Abbess of Hartlepool only a year later. Being a part of the royal family clearly had its benefits, either that or she had been involved in the church for some years already, without it being recorded. Perhaps both are true. 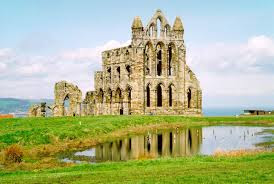 Her reputation as a woman of wisdom, energy and leadership grew during this time to such an extent that she was rewarded, in 657, with the offer to found her own abbey at Whitby (then known as Streonashalch) and she would remain there until her death in 680. It was a double-foundation in that it housed both men and women in separate houses, who then came together to worship in a single church.


Bede tells us that such was her wisdom she was often consulted by various kings and princes hoping to gain her advice on various weighty matters. She was known by all as 'mother' due to her outstanding grace and devotion. It was no doubt due to this stellar reputation that King Oswiu of Northumbria chose her Abbey as the location of his hugely important Synod of Whitby in 664. Churchmen and officials from as far away as Wessex came to debate the big issue of the day which was the correct calculation of the date of Easter. Sounds fascinating, right? The tickets to that one must have sold out in minutes.

Whatever we might think now, however, this was a big deal at the time. Due to the different traditions of the Roman and Ionan (i.e. from the Isle of Iona in Scotland) churches, Easter had been known to be celebrated on two separate weekends. This was because Oswiu had grown up in exile in Iona and had thus adopted the christian teachings of the monks there, whereas his queen, Eanfled, was from Edwin's side of the kingdom who had been converted by the Roman missionaries sent to England by Pope Gregory in 597. It was an intolerable situation to have the King and Queen observing Easter on different days. Behind the scenes, no doubt, a big political move was playing out here as the two sides manoeuvred for control over the church in what was the most powerful kingdom in England at the time, with its over-lordship of most of the rest of the kingdoms.

To boil the long and tedious arguments down to something that is palatable for this blog, the Ionans argued that they were right because they followed the teachings of the most holy Columba who had himself followed those of St John the apostle. The Romans, in the shape of Wilfrid (who is a very interesting character in his own right - I must cover him in a future blog), argued that everyone else in the Christian world followed the Roman practice favoured by the apostles Peter and Paul, and that Peter - as the original Bishop of Rome and keeper of the keys to the kingdom of heaven - trumped everyone else.

At this point, Oswiu showed his penchant for pragmatism in bringing matters to a close. It was late and he was no doubt gagging for a pint to clear his head. It had been a long day full of detailed and complex arguments, much of which he might have struggled to understand, but he had heard of St Peter and this gave him his opportunity to make a ruling. On hearing confirmation from both sides that St Peter did indeed hold the keys to heaven, he must have pushed his chair back and standing, declared "That's the very fellow for me - if he's the man that decides whether I can get into heaven, I for one will not be pissing him off." (Ok - I paraphrase what he may have actually said but I'm sure it was along these lines). And so the decision was made to adopt the Roman tradition. 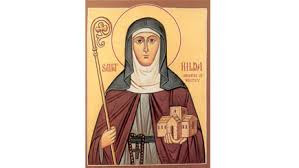 The decision put some of the Ionan adherents' noses out of joint and they left Northumbria for Iona in a bit of a huff. Hild, however, despite having followed Ionan tradition up until then demonstrated yet again her leadership quality by going with the flow, falling in line with the king's decision. She was therefore to remain Abbess of Whitby for a further 16 years until her death. Whereas a number of men took their ball home, unable to compromise, Hild recognised that there were bigger battles to fight in the continuing development of the nascent christian religion in the English kingdoms of the 7th century. Deciding on the date of Easter and how monks were to cut their hair (yes - that was another issue on the agenda) were not that big a deal for her.