St Martin’s, Canterbury: The oldest church in continuous use in the English-speaking world

Along with Canterbury Cathedral and St Augustine’s Abbey, the church of St Martin’s is recognised as part of a World Heritage Site. Parts of its fabric date back to the Roman occupation of Britain, and yet weekly services are still held there making it the oldest church in continuous use - in the English-speaking world, at least. Situated just to the east of the old city walls, it sits on a hill overlooking both the Abbey and the Cathedral. 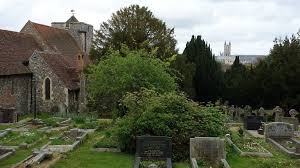 Although the original date of its construction is unknown, it will have been at some point during the fourth century, after the Emperor, Constantine the Great, had legalised Christianity at the Edict of Milan in 313CE, and before the legions abandoned Britannia to its fate c.410CE. Certainly, it is still possible to see roman bricks within the south wall of the Chancel.

It is not known what happened to the church after the Romans left Britannia, but it is reasonable to assume that it remained in use, at least for some time. The populace did not stop being Christian and nor were they wiped out by the incoming Jutes from the mid to late fifth century onward. I think there is every chance that the local Romano-British population continued to worship there, assuming their new overlords allowed them their freedom of religion, which I think is reasonable based on later events. 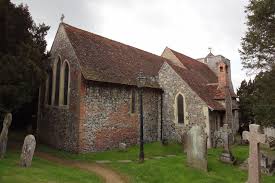 What we do know, is that the building still stood at the time of arrival of St Augustine from Rome in 597CE. In fact, it was already in use. King Aethelberht, the ruler of the Kingdom of Kent at that time had, some years previously (at some point prior to 581CE when the fact is first recorded) married a Christian princess, Bertha, who hailed from Frankia (roughly modern-day France). As part of the marriage arrangement, Aethelberht had promised to allow his new wife to continue to practise her faith, for which purpose she was accompanied by her own personal chaplain, a Bishop by the name of Luidhard.

What better building to provide her and Luidhard as a place of worship, then, than an old Roman church just to the east of his capital city of Cantwarabyrig? As Bede notes in Book 1, chapter 26 of his History of the English Church and People:

‘On the east side of the city stood an old church, built in honour of St Martin during the Roman occupation of Britain, where the Christian Queen of whom I have spoken [Bertha] went to pray. Here they [Augustine and the rest of the Roman monks] assembled to sing the psalms, to pray, to say Mass, to preach and to baptise…’

There is some evidence that the building was in need of repair by this time, or else, perhaps, Aethelberht recognised a need to rebuild and expand to accommodate the increased demand as he and many thousands of his people began to convert to the faith from the end of 597 onward. The nave, for example, which seems to survive to its full original height appears to date from the early 7th century. 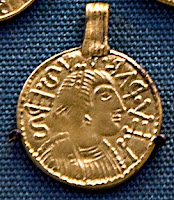 Finally, there are a couple of quick footnotes worth noting around this time and location. Firstly, in a rare but wonderful confluence between archaeology and the written record, a gold coin or small medal was found sometime before 1844 as part of a burial near to St Martin’s. The coin is set in a mount so that it could be worn as jewellery (most likely a necklace). On the front is depicted a robed figure with the inscription: LEV.DAR.~VS.EPS (which effectively translates to: Luidhard, Episcopus (or Bishop)). On the reverse is a cross design. Clear evidence for the presence of an otherwise shadowy figure in the late 6th century court of the King of Kent.

The other fact that I find fascinating is that it was only after the arrival of Augustine in 597 that King Aethelberht finally converted to Christianity. And yet he had been married to a Christian for the best part of twenty years and no doubt had regular contact with her Bishop during that time. Why is it that he only converts once the monks arrive from Rome? How had he managed to ignore his wife for so long (assuming she was constantly on at him to do away with Woden, Thor and the like). It is a feat that few men past or present have ever managed. And when he did finally convert at the behest of Augustine, Bertha must have been, like, “Hello? Can anyone see me?”  (nod to The Fast Show sketch).
The reasons behind this mystery form a significant element of my new novel, James the Deacon, which I hope to publish before the end of the year.